...Onwards to the gloomy and towering vaulted ceiling of a former bank, situated inside of a Gothic 1920’s skyscraper in New Orleans's Central Business District. A wind-swept and decidedly chill-blasted docent directs us inside to Saccade-based Display. It’s an interesting space, and at first we’re not quite sure what we are supposed to be looking at. Yes, there are some colored LED lights--shades of Dan Flavin--but are we missing something? The space itself is so imposing it’s kind of cool to hang out there, but then the docent pops in and gives us a clue – move your head from side to side while looking at the LEDs - and suddenly images light up the space. The effect as your eyes move across lights is Wow, Kazaam, Kaboom, like a fleeting pop art display, images and words revealed only by the residual afterimage on the retina. We’re surprised and pleased by this subtly clever creation, another Japanese installation from Hideyuki Ando, Tetsutoshi Tabata, Maria Adriana Verdaasdonk and Junji Watanabe. 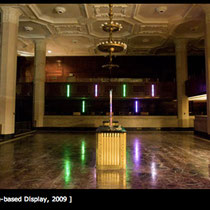 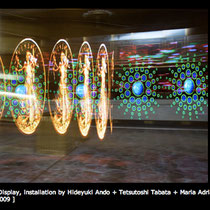 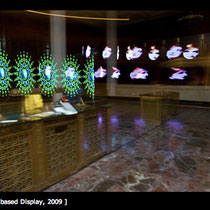 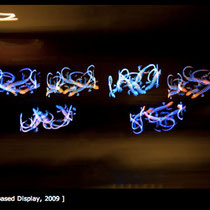